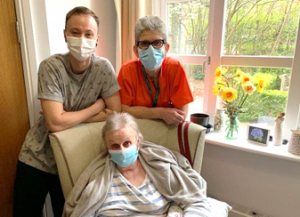 Employee of the Month is a great honour, no matter where you work. However, for two members of the care team at Gloucester House Care Home in Sevenoaks, this achievement was extra special, as they were nominated by a resident of the home.

Rueben and Rose, two vital members of Gloucester House’s care team, were nominated for the award by resident Gillian, who wanted to express her gratitude for the exemplary care she has received at the Greensleeves Care operated home.

Gillian explained the reasons behind her nomination, saying “I nominated Rose and Reuben because they work so well together, they are so sensitive to my needs, encourage me to be independent, and always go the extra mile.”

Gloucester House shared the news on their Facebook page, and the post was met with a stream of comments congratulating the two stand-out employees and endorsing Gillian’s choice. One comment read ‘Rose and Rue have a great rapport with Gillian and she trusts them completely – a lovely compliment.’ Another comment concurred, saying ‘Well done to both of you for being so professional and caring.’

It goes without saying that having wonderful staff- particularly within the care team- has a direct impact on the residents; so what better way to demonstrate this than having the residents themselves give thanks to those who care for them each and every day?

Gloucester House, along with the twenty-four other Greensleeves Care homes, operates under the Eden Alternative Approach, which prioritises older adults’ independence and emphasises their individuality within the care home setting.

Having residents of Gloucester House involved in the employee of the month scheme is a great example of this approach working in practice, as residents’ thoughts, opinions and feedback are held in high esteem, while staff are deservedly recognised for their hard work and dedication.