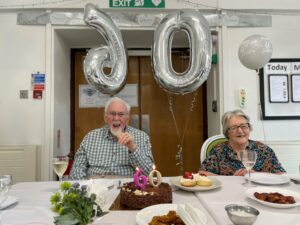 Anne and Jim McClelland are both residents at the Greensleeves Care home, where they celebrated the day surrounded by friends and family.

The easing of government restrictions on care home visitors was very well timed for the occasion, as the couple were allowed to be joined on the day by friends and family.

The staff at Speirs House organised a surprise tea party for the happy couple, where they had a specially made cake from the catering team, scones with jam and cream, and even a tipple or two!

They also received a special message of congratulations from Her Majesty the Queen, in honour of the occasion.

Mr and Mrs McClelland met in the late 1950s at Manchester College in Oxford, where they both studied Theology. When they got married in July 1961, Anne was in her final year of study, while Jim had just started his first ministerial post at Padiham Unitarian Church in Lancashire.

The wedding was in Anne’s hometown of Doncaster, Yorkshire, in a Unitarian chapel, where the service was poignantly conducted by both the Minister of the chapel, and the principal from their college in Oxford.

Anne’s white satin gown was made by her mother, and she wore a beautiful headdress of orange blossom flowers. Jim’s two sisters had come over all the way from Ballygally, Northern Ireland, to be Anne’s bridesmaids.

The couple went on to have three children and four grandchildren and are still happily living together at Speirs House.

When asked what advice they would give to couples to ensure a long-lasting and happy marriage, the message was simple: communication is key. Anne said, “make sure to talk to each other about everything, and to listen in return.”

A diamond wedding anniversary is certainly an admirable achievement, and we wish Mr and Mrs McClelland many happy years to come.