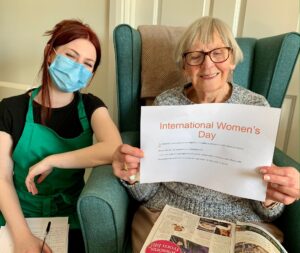 Following International Women’s Day, De Lucy House Care Home established an intergenerational women’s discussion group which invites local young women and girls to meet with the female residents of the home and share their experiences with each other.

The first meeting involved a local student, Poppy Bernard (18) who is currently on work experience placement at the home. Poppy spoke to Anne, Jean and June, residents at De Lucy House, about the changing roles of modern-day women compared to when the residents were younger.

Family roles and expectations were a major topic of discussion, as Jean, who was born in 1935, said:

“Expectations for girls were to leave school, marry, and have children. Then the children always came first. It was always about having a big white wedding.”

“Women’s choices for work were private service, nursing, office work or tills, and you were expected to give up working when you got married.”

Jean said that the introduction of the contraceptive pill in the 1960s has brought about the most change as women can plan their families and have more choices.”

Another topic of discussion was education and careers, whereby opportunities have massively increased for women.

Poppy said that she feels as a young woman in 2022 she expects to have both a career and a family one day, rather than choosing between the two. Poppy is currently studying Health and Social Care at Suffolk One College and is going to university later this year to become a nurse.

Anne studied Horticulture at university, where she was one of only three women on her course in 1946. June studied English at Bristol University but said that course options for women were limited to teaching and nursing, whereas technology was male dominated.

“Women are now being respected within male-dominated environments but are still fighting for their place in a man’s world.”

“It’s a mixed bag for young women now, it’s a wider world to have to deal with. Everything still depends on lifestyle, economic factors, parents and where you’re born in the country. However, women are now more ambitious than I was at age 18.”

Poppy agreed with Anne’s statement, saying that she is free to make her own choices; she drives, has a social life and is independent while she is studying.

The group discussed whether life is now more complicated for women, despite the extra freedoms.

Jean said that the almost unlimited choice for women makes life more complicated in her opinion, due to higher expectations placed on them.

Poppy said “I am glad I live in 2022 now, although life seems more complicated to the older generation, there is so much more opportunity. Women of June, Anne and Jean’s generation helped forge the way forward to enable stronger women now.”