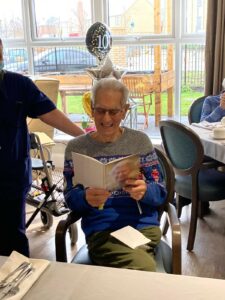 Freddie Howe, an Ely War Veteran, turned 100 in style on 11th January at The Orchards.

Freddie has been local to the Ely area all of his life and moved to The Orchards in August 2020 where he has become a well-loved member of The Orchards family.

The centenary celebrations began with Freddie opening his presents from his family as well as his fellow residents and colleagues of The Orchards.

The posties of Ely were certainly kept busy in the run-up to the big day, as Freddie received over 70 cards from kind people in the community.

Freddie worked during the Second World War in the Telegraph Services in Fakenham, where he operated teleprinters (electronic typewriters).

In 1942, aged 20, Freddie was summoned for military service, where he did basic training in Yorkshire, and then technical training in Norwich. From 1942 to 1945 Freddie was involved in many campaigns including an invasion convoy from Glasgow, which sailed around the south Atlantic for 10 days, all the way to Algeria.

Freddie gave a birthday speech (and history lesson!) all about the fascinating life he has led so far, and he told everybody at The Orchards that “the key to life is being content with what you have.”

Celebrations on the day included a lively party with resident and colleagues at the home, as well as a visit from Freddie’s daughter, Janis, and a lovely birthday lunch and homemade cake.

“It is always an honour to be able to celebrate our residents’ birthdays, and especially when we are celebrating 100 years of life. The close bonds that form between our residents, and between residents and colleagues, really shine through on occasions like this, as everybody had a wonderful time celebrating Freddie’s special day.”

For more information about The Orchards, please visit: https://www.greensleeves.org.uk/care-homes/the-orchards-ely-cambridge/