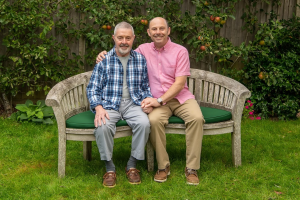 Jonathan Moon, a Chandlers Ford resident, is due to take part in the Fastnet Yacht Race Challenge, a 700-mile offshore race, to raise money for St Cross Grange care home in Winchester where his dad currently resides. St Cross Grange specialises in dementia care and is part of Greensleeves Homes Trust, a registered charity providing personalised residential, dementia and nursing care. Mr Moon is undertaking the challenge with the Sail Racing Academy out of Hamble.

The money raised from the challenge will go towards purchasing a Tovertafel (Magic Table in Dutch) for the residents at St Cross Grange care home. It is a £7,000 piece of equipment developed for and with people in the moderate to severe stages of dementia. The interactive games break through apathy by stimulating both physical and cognitive activity and encouraging social interaction. 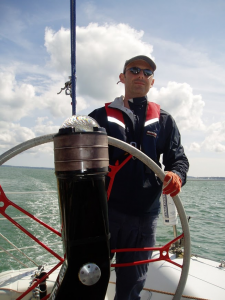 Jonathan Moon decided to undertake this challenging race just as his dad, Paul, did 40 years ago on a UFO 31 yacht called “The Happy Return”. The challenge will start in Cowes, and finish in Cherbourg via the Fastnet Rock off the SW tip of Ireland.

Jonathan Moon said: “I still recall going to watch the start from the Green at Cowes, and the feeling of excitement and worry, after all this was my Dad, my hero, the man who taught me how to sail, heading off into a race that 2 years before had taken the lives of 15 sailors.

Fast forward 40 years, and my Dad now lives in a care home in Winchester with Lewy Body Dementia – the same form that led to the death of the actor Robin Williams.

This year marks the 40th anniversary of him taking part in the Fastnet, and I have decided I should do this race, and by doing so, help raise money for the care home my Dad lives in.”

Adding even more poignancy to the occasion, Jonathan’s cousin, Oliver Moon, will now be taking part in the race. Oliver sailed in the 1981 Fastnet challenge with both his and Jonathan’s fathers, as the youngest competitor at only 15 years old. Sadly, Oliver lost his father just a few short months later, meaning the 1981 race was the last time Oliver would race with him.

Despite having been so young, Oliver clearly remembers the events of the first race, saying: “It was slightly daunting as the previous race had made national headlines for tragic reasons and we were one of the smallest boats in the race. At 15, I was also the youngest competitor, but I had sailed offshore in the boat in bad weather and at night before and, with my dad, my uncle, and my godfather Rob on board, it honestly never occurred to me that it could be anything other than a fun adventure. Another old friend of my dad’s, Barry, completed the crew.

It was indeed an adventure that I will always remember, particularly as my father sadly died suddenly and unexpectedly a few short months later, at the age of 36. So, much though I couldn’t have known at the time, the ’81 Fastnet Race and the delivery trip home to Essex afterwards was my last ever sailing trip with him.

So, with my lovely wife’s encouragement and at least partly in memory of my father, I am very pleased to have the chance to join Jon, along with Germaine and the rest of the crew.  Hopefully, 40 years on, we will be able to recapture the same spirit of togetherness, fun and adventure that I remember so fondly, and I am absolutely delighted to support Jon’s fund-raising efforts to help his dad, my uncle Paul, and the others in St Cross Grange.”

First conceived way back in 1925 as a 608 nm challenge ending in Plymouth, 2021 will see the end point of the race move to Cherbourg, France, bringing this testing course up to nearly 700 nautical miles and the first major change to the course for nearly 100 years. Seen by many veterans as a number of smaller races encompassed by one big race it has played a large role in the growth of offshore racing and it certainly challenges all of your physical and mental skills.

The race will start from Cowes on the Isle of Wight, around 300 boats pass the Needles, heading along the southern coast of England towards 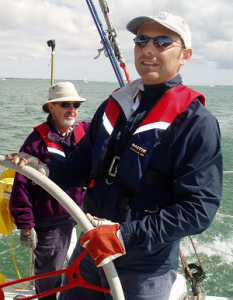 the Lizard then around the tip of Land’s End. From there, the boats will head north through Celtic Sea waters towards the Fastnet Rock on the southern tip of Ireland. Once around the Rock, they will head back southwards, round the Scilly Isles then south east across the English Channel towards Cherbourg.

Jonathan Moon said of his fundraising challenge: “My Dad is still my hero, and if by my following his footsteps, could possibly help raise the money the home needs to provide the equipment to help enrich his life, and those of all the residents, that is a challenge I am happy to take on.

I will be sailing with Germaine Williams and the team at Sail Racing Academy, and they have generously offered to assist in the fund raising during this Fastnet Cycle.”

If you would like to sponsor Jonathan Moon please visit: https://gofund.me/a0602f45