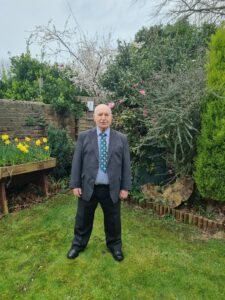 Greensleeves Care celebrates its 25th anniversary on 1st April. As part of its celebrations, the charity is spotlighting some of its longest-standing residents across all 26 of its homes.

Cyril Ward, a 90 year-old gentleman, has lived at Torkington House in Acton, West London, since 2006, and on this milestone for Greensleeves Care he is reflecting on 16 years at the home.

“I have been at Torkington House for 16 years. I am 90 years old and still get around. I used to have a rowing machine and now have an exercise bike- I do about an hour and a half each day.”

Cyril works hard to maintain his mobility, proudly saying that he “only uses a walking stick when he goes out, and enjoys walking in the nice garden in the summer.”

Cyril talked about how he spends his time at the home, saying:

“We play Scrabble, Ludo and Snakes and Ladders. We have quizzes and singalongs.”

He also embraces moving with the times, as he recently bought himself earphones and a tablet, saying “It is one of the best things that I ever bought.”

Cyril continued, “I have also got a laptop and a computer, which the girls [carers] have shown me how to use.”

Alexandra Apostu, Torkington House’s administrator, said: “Cyril just learned how to use the computer recently and we are all very proud of him.”

In his earlier years, Cyril worked at Harrods with his friend Iris, who is a fellow resident at Torkington House, and has herself been here since 2004. The two have remained firm friends throughout their time at the home.

Cyril was also a keen organist, though he admits that he has struggled to be able to play in recent years. He kindly says that he intends to leave his beautiful organ to the home.

Torkington House has undoubtedly changed within almost two decades- Cyril comments that “I have seen a few come and go, but I get on well with most people here.”

Reflecting on his life so far at Torkington House, Cyril concluded “I hope to spend the rest of my days here. I would not like to be anywhere else.”