Tickford Abbey is a Grade II listed building located in Newport Pagnell. It is now a residential and dementia care home owned and managed by Greensleeves Care.

Tickford Abbey is located on the original site of a medieval priory. The priory was established in 1140 by Fulconius Paganel, the Lord of the Manor of Newport Pagnell. The priory was a cell of the Cluniac Order, headquartered at Marmoutier Abbey in Tours, France. As most of the monks originated from France, it was considered an alien monastery. As such, its income was seized in the wars between England and France when Edward III and Richard II reigned.

The monastery enjoyed freedom from tolls at the local market and derived much income from its lands. However, the rules were not followed properly, and the monks rebelled against the Bishop of Lincoln and the vicar of Newport in the 13th and 14th century. Between 1278 and 1290 several monks were imprisoned and excommunicated for their bad behaviour and excesses; the last prior was Thomas Brooke. In 1311 a fire destroyed all the charters recording grants of land and privileges to the monks and a new charter was obtained from the Crown listing all their holdings.

When the priory was dissolved by Henry VIII in 1525, both abbey and land were given to Cardinal Wolsey who annexed “the superfluous house of Tickford”. The “Issues of the House” were assessed at £57 11s 4d, the bells and lead at £33 6s 8d and the moveable goods at £5 4s 0d. In 1530 the land was repossessed and subsequently given to Christ Church College in Oxford but, again, reverted to the Crown. 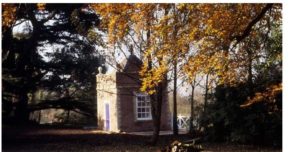 In 1600 King James I sold the abbey to his physician, Dr Henry Atkins. The current Georgian mansion was built by the Hooton family on the site of the medieval priory. By the early 18th century, some former Tickford Priory buildings were still standing, but they were in poor condition. Around c1767 Thomas Hooton built the house that stands today. Much of the fabric of this building is believed to have come from the Tickford Priory. There is a family vault to the rear of the premises in the grounds of the Priory Burial Ground also a tall Obelisk which was erected by Thomas Hooton in memory of his wife Sarah. Another feature of the Abbey is the Gazebo, restored and modernized in 1987 under an initiative of the Buckinghamshire Historic Buildings Trust, which stands by the River Ouse in the extensive grounds of the house. The Obelisk and Gazebo are both ancient listed monuments.

In 1846 George Lucas sold the Abbey to William Powell. It was William Powell who created the magnificent Tickford Park and built the two lodges at the end of the drive. Over the next century, the abbey had a number of owners: Richard Mansel Oliver Massey (1869), Evan Williams (1881), Phillip Butler (1883), William Wates (1891), Phillip E Butler, son of previous owner (1901), Major William John Chesshyre Butler (1903). It is assumed that the Butler family let the Abbey in the following few years, hence the reason for the number of occupiers in such a short time: Colonel William Henry Allison (1907), Michael John Godby (1911) and Colonel Butler (1915).

In 1930 March, Dr Douglas Ernest Mannering Douglas-Morris was running a private hospital at the Abbey. He changed the name to Tykeford Abbey Nursing Home.

Please contact Tickford Abbey on 01908 611121 if you would like to arrange a visit to see this magnificent building and care home.