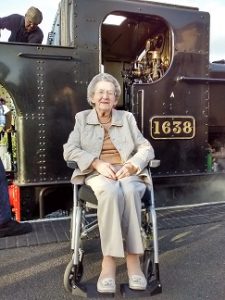 On Tuesday the 23rd October residents and staff from Whitegates care home enjoyed a trip on the Kent and East Sussex Railway. Empress Coaches were used to transport residents and their wheelchairs to Bodiam station, where they boarded a steam train.

A special carriage called ‘Petros’, was booked for the journey. It was a specially adapted carriage for the disabled. ‘Reserved’ cards were already in place on the tables when Whitegates’ residents and staff boarded.

The wonderful team of K&ESR volunteers helped everyone to board, served an afternoon tea and also gave a short talk on the history of the railway line that runs from Tenterden to Bodiam through glorious Sussex country-side.

The day was a real adventure, providing good views as the train steamed and whistled on its way. 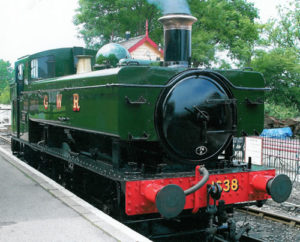 Steam engine No.1638 pulled the carriages. This class of locomotive was built in Swindon by British Railways between 1949 and 1955, to a restricted loading gauge for use on routes with low overbridges.

No.1638 was allocated to Wales and was eventually with-drawn from service in 1966. It was purchased for preservation by the Dart Valley Railway in 1967 for £1300.

The locomotive was acquired by the K&ESR in 1992 and had an over-haul in 2016, when its livery was changed from green to black. It weighs over 41 tons, and has a coal capacity of 2½ tons. Its wheels are over 4ft. in diameter.