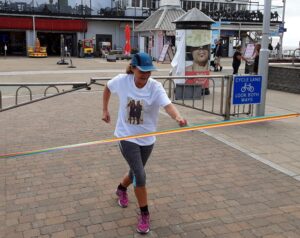 Janine O’Neill, activities assistant at Harleston House, completed a local fun run in Lowestoft last weekend to raise money for the Greensleeves Care home on behalf of her colleague, Jackie Winfield, who sadly passed away in June.

Jackie had completed a park run to raise funds for Harleston House two years ago and had been planning to run another this year. Janine decided to take on the challenge herself, in memory of the home’s colleague and dear friend.

“Though Janine is not a runner, she set herself this challenge before Jackie passed away. Jackie was delighted that Janine was going to do this on her behalf due to her illness.”

A big crowd of supporters was there on the day, made up of residents, colleagues and family members alike; both to cheer Janine along throughout the race, and to commemorate and celebrate Jackie’s life.

Harleston House is a home that prides itself on the family feeling between residents, colleagues, and relatives; and this event was a poignant way for everybody who knew Jackie to express their love and support.

Janine is still collecting donations for Harleston House in Jackie’s name, and if anybody would like to kindly donate, it would be greatly appreciated, and they can do so at the home’s reception. To get in touch with the home, please find contact details via this link: https://www.greensleeves.org.uk/care-homes/harleston-house-lowestoft/ 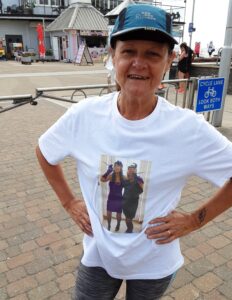 Janine wore a t-shirt for the run depicting herself and Jackie who sadly passed away. 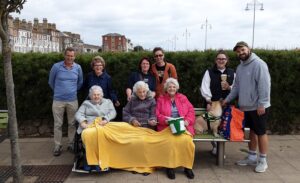 Residents, staff, and colleagues cheered Janine on from the side-lines.