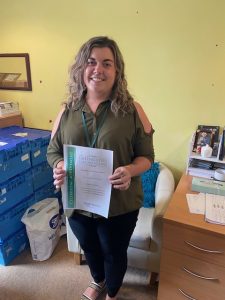 Paige Dewbery – Manager of the Year

Harleston House care home in Lowestoft has been recognised for the quality of care it provides to its residents with no less than three national Care Awards. Competing for these awards with 23 other care homes across the country, Harleston House was officially crowned ‘Home of the Year’. The care home has also received ‘Provision of an Outstanding Activities Program’ Award while its Deputy Manager, Paige Dewbery, was awarded the ‘Manager of the Year’ Award.

Due to the government imposed lockdown, Greensleeves Care Awards needed to be held as virtual events in each award category instead of the annual gala event held at Raddison Blu Hotel in London. However, this has not diminished the value of the individual awards or the excitement from winning the awards.

The care home, which provides high quality dementia care, was rated ‘Outstanding’ by the care industry regulator, Care Quality Commission (CQC), on 17th January 2019. During the inspection, inspectors found that people continued to receive excellent care by kind and compassionate staff and were supported to have a meaningful and enjoyable life.

Harleston House – Home of the Year 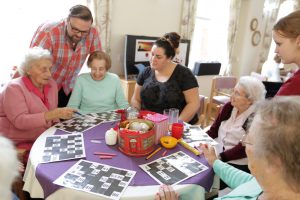 The provision of activities was equally praised in the CQC report: “Within the home a strong ethos of ensuring people were actively encouraged and enabled to pursue their hobbies and participate in meaningful activities to support them living as full a life as possible had been established. People had contributed towards the excellent range of individual and group activities and events provided in the home. Their suggestions had been facilitated and included but were not limited to, a pet open day, tea dance, learning Spanish, fete with bouncy castle and trips out in the community and surrounding areas.”

The ‘Home of the Year’ Award aims to recognise the care home which has achieved high standards of care, excellent team working and a continuous person-centred approach to the delivery of care including excellence in the interaction with residents, their families and friends. The residents are always at the forefront of everything that happens within the home.

As part of the nomination for the award, the judges’ panel received many positive comments about the care at the home from the residents at Harleston House. One resident said: “I was lonely and depressed when I first came here. I had given up. I was painfully shy and scared. I had forgotten how to mix with people. They [staff] brought me out of my shell, spending time with me helping me to settle in and to make friends. My life is so much better. I look forward to each day and what it brings. My only regret is I should have moved here sooner.”