It is sad news that Doris Day passed away yesterday.  Up until her last day she demonstrated what an amazing and selfless person she was as the story below demonstrates.

Two months ago, Gareth Harding – Activity Coordinator at Harleston House care home in Lowestoft, Suffolk, had a conversation with a resident called Roy. They spoke about many things that afternoon, and the one thing that stuck in Gareth’s mind was how Roy looked when he told Gareth a story about Doris Day. Roy told him that she was a love of his life and his whole face lit up and he looked so happy when talking about Doris Day. Gareth often played her records and showed him clips from her past and Roy would fall in love all over again when he looked at her on the screen. Roy has recently been unwell and his dementia has declined so Gareth did not tell him that he had found where Doris lived and that he wrote to her, telling her how Roy was a huge fan and how her music makes him feel. 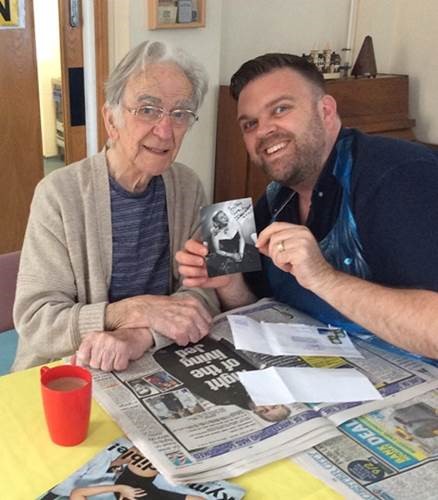 On Sunday 5th May Roy received a signed photo from Doris Day and he said “It’s made my day”. He got a little tearful then he said “I must have made an impression on her that night”, he still has his great sense of humour. Gareth found the whole thing so overwhelming and he felt that a letter has turned into one of the greatest things he has done whilst being an activities co-ordinator but it took little effort.”

This might be the last photograph Doris Day has signed.