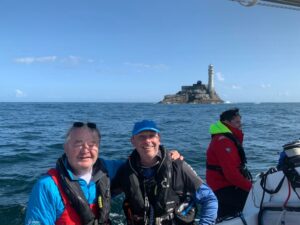 Jonathan’s father, Paul, completed the race himself 40 years ago and is now a resident at the Greensleeves Care home. The ongoing fundraiser aims to purchase a Tovertafel, an interactive ‘magic table’ for residents at the home who are living with dementia.

Of the 355-strong fleet that set off at Cowes, Isle of Wight, 79 boats had to withdraw during the first 36 hours with various issues including masts breaking, collisions, and more.

This rocky start was certainly the most challenging for Jonathan’s crew, Escapado. With strong winds to contend with, Jonathan admits to a degree of anxiety, saying:

“Many of our crew were struck down with sea sickness, but as a team we battled through the terrible conditions. We were led by a skipper who has raced around the world, and trained many people to sail around the world, so we had total confidence we would get through it.”

The Fastnet Challenge is named after the Fastnet rock and lighthouse off the southern coast of Ireland, which the Escapado crew reached 3 days into the race. This was an emotional point for the crew, as Jonathan’s cousin and fellow crew member Oliver had rounded this point exactly 40 years ago with Jonathan’s dad, as well as his own father, who sadly passed away only a few months later.

This milestone inspired the crew to push on despite the obstacles, and to remember the reason behind the challenge.

The crew finished the race on at 2:18pm on Friday the 13th of August, just over 5 days after they had left Cowes, placing 34th in their group out of 72 starters.

Jonathan describes the emotional feeling of finishing the race, saying:

“It was an amazing experience and challenge, and one I am so happy to have shared with my cousin Oliver Moon, who did the same event 40 years ago with both our dads.  We had storms, light winds, sunshine, rain, dolphins, whales, and every night an amazing meteor shower, including the brightest shooting star I have ever seen.

We created memories to last a lifetime, and I know we did our dads proud.”

Jonathan’s father, Paul, is living with Lewy Body dementia at St Cross Grange, and Jonathan hopes that he can raise the final amount needed to purchase the Tovertafel, which will improve the day-to-day life of Paul and his fellow residents.

Jonathan continues: “I am so proud of what we achieved, and how much money we have raised so far for St Cross Grange. Will I do it again? Ask me in a week!”

To contribute to the Tovertafel fundraiser, please follow this link to the GoFundMe page: https://www.gofundme.com/f/robert039s-campaign-for-greensleeves-homes-trust