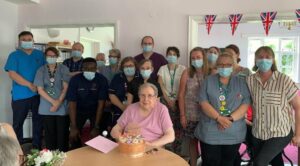 Winnie (centre) on a recent birthday with members of the Gloucester House team.

Greensleeves Care celebrates its 25th anniversary on 1st April. As part of its celebrations, the charity is spotlighting some of its longest-standing residents across all 26 of its homes.

Winnie Hull, an 86 year-old lady, has lived at Gloucester House since 2002, and during her time at the home she has raised over £48,000 for the residents’ amenity fund, and has won multiple fundraising awards.

Born in 1934 in North Shields, Winnie left school aged 14 and had several jobs including working in a fairground and selling deckchair tickets on the beach.

At age 20, she moved to London and married Mr Gbadebo, who was a prince in his home village in Nigeria- making Winnie a princess!

Winnie moved into Gloucester House on 13th December 2002, which she describes as “the best day of my life.” Two senior carers, Wendy and Rose initially welcomed Winnie to the home back in 2002, and Winnie is delighted that they both still work there today.

Winnie is known as an advocate for her fellow residents, particularly when they first move into the home. She encourages people to join in with activities, and the Gloucester House team say she is “an activities assistant posing as a resident.”

Winnie’s greatest achievement, however, must be her fundraising efforts. For over 14 years, Winnie has been running a weekly bonus ball at the home, whereby 59 people pay £1, and each week the winner receives £30 and the rest is put into the residents’ amenity fund, which goes towards entertainment, outings, equipment and more.

Winnie also holds regular raffles, and keeps meticulous accounts of her fundraising efforts, which currently stand at £48,764 and counting.

Over her 19 years at Gloucester House, Winnie says the last few years have been the most difficult due to Covid restrictions stopping her from going out and about- something she loves to do. Since living at Gloucester House she has met the Queen at a Buckingham Palace Garden Party, been to Paris and had champagne at the Eiffel Tower, had lunch at The Shard, Afternoon Tea at the Hilton and been on the London Eye!

When asked what Winnie enjoys most about living at Gloucester House, she said “my privacy is respected and it’s just like being at home.”