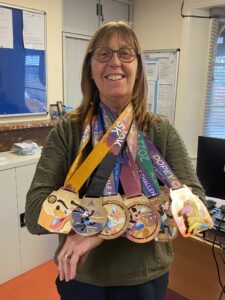 Karen Shepperdson, Home Manager of Borovere Care Home in Alton, has once again donned her running shoes and won six medals at Disney World Florida as part of the runDisney marathon weekend.

Karen is an avid runner, having completed the London Marathon eight times, with her ninth in the pipeline, as well as countless other marathons around the world. She is also the proud owner of hundreds of medals.

The runDisney event consists of four days of runs: a 5k on day one, followed by a 10k, then a half marathon, and finally a full marathon on the last day. Meaning that in total, she ran over 78km in four days!

Karen has been taking part in the runDisney event since 2011, however last year’s event was cancelled due to Covid. Taking a year out didn’t slow her down though, as she came back with a bang and managed to knock 43 minutes off her time, completing the marathon in 5 hours 31 minutes.

The residents at Borovere are Karen’s biggest fans, and enjoyed choosing their favourite medals from the race: Maisie loved the Mickey Mouse medal and Patricia’s favourite was Pluto. All of the residents commented how proud they were of Karen.

Karen very much appreciates the support of both the home’s residents and colleagues, saying:

“The support I receive from everybody at Borovere is second to none. The residents in particular love to see my medals and photos from the races, and I love to be able to share the experience with them.

This event was extra special as the previous one was cancelled due to Covid, so it was great to be back, despite the fact that I did fall over!”

Karen has returned from running around Disney World to running the home and is back in the swing of things with keeping Borovere’s residents safe and happy as we begin to return to a sense of normality.