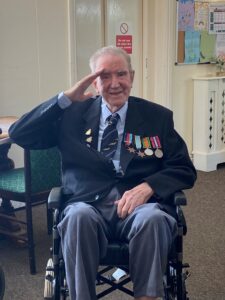 The former Bomber Command member was joined on the big day by Sqn Leader John Plenty from RAF Odiham, who presented Sgt Rowlinson with a framed print of a Chinook Helicopter, signed by the entire 27th Sqn.

“It was absolutely right that Mr Rowlinson’s 100th birthday should be celebrated in this way, with such touching tributes to his astonishing life and career. We feel very honoured to have Mr Rowlinson in our care, after all he has done for our country.”

Sgt Rowlinson played an integral role in the Second World War. At age 20, he joined the RAF Volunteer Reserves as a wireless operator and air gunner. He went on to serve at RAF Bobbington, Silverstone and Turweston from 1942 – 1943.

In 1944 he become part of Number 5 Group, Bomber Command, at RAF Skellingthorpe in Lincolnshire, where he flew 19 bombing missions over enemy territory.

After the war, Sgt Rowlinson utilised his carpentry skills to building new homes and repairing those destroyed by bombs.